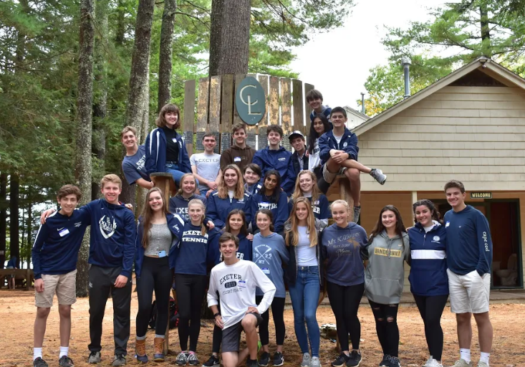 On October 8, the Exeter High School student senate participated in a southern district conference composing of a total of five schools from Southern NH. The 27 Exeter students were able to participate in fun team building exercises throughout the grounds of Camp Lincoln. Senate Advisor Mr. Provost remarked, “The conference is a great way to start the year because it is all about team-building. The activities challenge our student leaders to problem-solve, communicate and collaborate in a hands-on environment.” This definitely proved true when students had to collaborate in order to cross the “peanut butter pit,” one of the various activities.

During the conference students were able to share out what is happening at their respective schools; students from EHS were eager to learn what other schools were doing. Sophomore Ethan Van-Gils commented, “getting to know what some of the other schools were up to was very interesting,” and he added, “Exeter is supreme at shuffleboard,” a game that students played in between activities. Exeter E-Board members, Sawyer Rogers and JR McDonnell, shared out for Exeter recapping our homecoming festivities and the beginning of school convocation. Rogers, who is currently also senior class president, praised his fellow EHS students saying, “Camp Lincoln was not only fun but also prepared and got the group off to a terrific start.” The student senate is now looking forward to helping their community wit town cleanups and sending students to a statewide conference in the coming weeks.