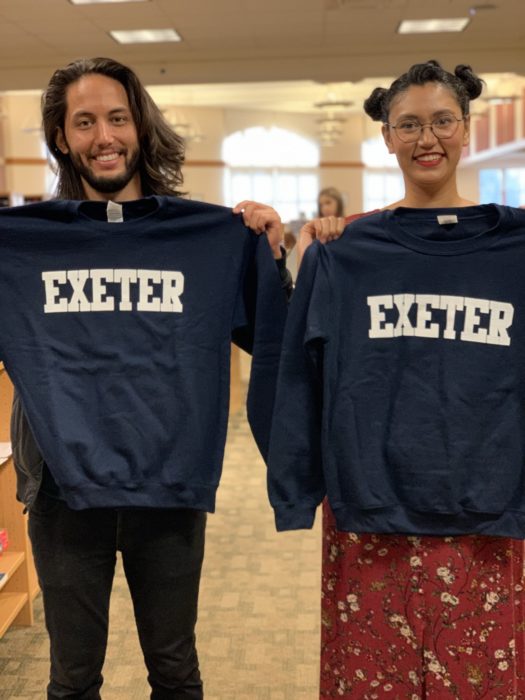 Close your eyes and listen to what people around you are saying. Can you picture their words turning into colors like a painting? Visualize the rhythms and rhymes that flow out of their mouths like a river. Now open your eyes and say the first word that comes to your mind: poetry.

That is exactly what slam poets Sarah Kay and Phil Kaye did when on stage here at Exeter High School. The students were enraptured as they shared their stories with nothing but their voices and imagination. They even earned the compliment, “Wow, that didn’t suck!” from a few football boys. The compelling repetition in their words caused an immediate hush over the audience.

The poems they performed together answered questions many of us had, such as: are they related? Are they dating? Do they want to date? Are they secretly dating and not telling anyone? Is one in love with the other, but too afraid to come out and say it? All had the same answer: no, which was heavily emphasized to the crowd. In fact, they have no romantic feelings whatsoever. However, as shocking as that seemed, the most intriguing part of their story was how they got to where they are now.

Sarah and Phil performed a poem together that explores the first time they met, during a college freshmen talent show. That poem, called An Origin Story, walks listeners through a glimpse of their lives until they met and their first impressions of each other; and it is truly remarkable. After they met, their plans for life completely changed.  “It was a little bit at first accidental; we were like we will do this for a year… after we graduate until we get ‘real jobs’ …. What started as we will do this for a year turned into ten years later and we have been doing it ever since and then. Once it was clear this is what we were going to do for real, then we were very intentional with our hard work and efforts… so accident, and then intention, ” Sarah said to me while I spoke to them after their performance.

In a quick, on-the-fly interview with the poets, we talked about their path together, individual poems about the future and their expectations for performing in schools. To my surprise, both said that neither had a specific prediction of how they thought Exeter High School was going to react. Where he tends to get himself in the most trouble, Phil was telling me, is when he tends to make assumptions of his audience, therefore he tries to keep an open mind.  The ability to keep an open mind for their audience gives them more room to explore and perform how they think best; and with the confidence carried in every word that flew off their lips, Sarah Kay and Phil Kaye left the audience in awe.