A Project for Better Journalism chapter
The Talon
Featured, Learning, The Arts

“Leaves Turn Inside You” Album Review 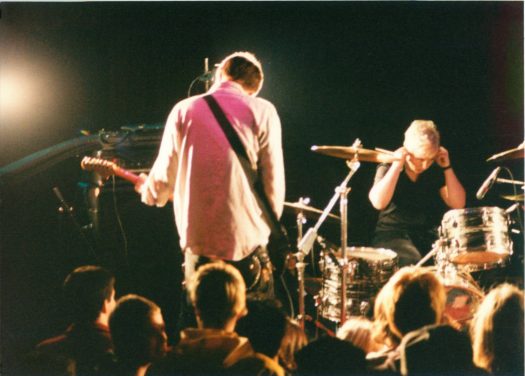 Unwound’s 2001 album Leaves Turn Inside You is one of those pieces of art that, to try to describe, would be like trying to recreate a Pollock painting with crayons. Everything that it means to me, everything that I love about it, and especially my own experiences discovering it are just lost when I try to describe why it’s good, much less try to review it. That said, Leaves Turn Inside You is too great not to speak about, and this is my best outlet, so here goes nothing.

To give a frame of reference, Unwound’s first album Fake Train was purely a post-hardcore album. Immediately, they demonstrated incredible skill and maturity. The song “Kantina” is a perfect example of this. Generally, when post-hardcore musicians try to express sadness, they do it in the frame of anger or catharsis (“Good Morning Captain” by Slint is a perfect example where the simple lyric “I miss you” is yelled), but “Kantina” is just as somber as an Elliott Smith song yet just as blood-pumping as a Fugazi song. 3 years later, Unwound released Repetition, where the ideas of Fake Train were expanded on with noodling instrumental sections and varying song structures. Finally, Leaves Turn Inside You was released in 2001, and here we are now.

I hesitate to call Leaves rock; forget about calling it post-hardcore or even indie rock. Sure, it has all the elements of rock: guitar, drums, bass, and even a mellotron on some songs, but the song structure and songwriting is completely different from anything I’ve heard before. For instance, in the song “Demons Sing Love Songs”, a 4/4 dance beat is used as the drum beat. This isn’t unheard of—Arcade Fire is known to use these same beats in their own indie-rock songs. However, Unwound sets themselves apart by contextualizing this sort of beat in a song with gloomy guitar tones and lyrics about how you’ll inevitably get your heart broken if you decide to be vulnerable and love somebody else. “Terminus” is another perfect example of the alien nature of this music. It begins with a simple bass line. The tone is incredibly distinct—it warps and buzzes with each note, and sets the foundation the rest of the song is built on. The song as a whole blends progressive songwriting with punk guitar tones, lyrics, and beats. The song “ends” with a cello and a violin fading into the mix and drowning out the more traditional rock instruments. Then, a groovy Rhodes keyboard-based prologue and actually wraps up the song. It’s a bizarre artistic choice, you would normally think that the prologue would feel unnatural or forced, but it works regardless. That’s why I enjoy this band so much, they don’t allow even the broadest of genres define them. Unwound simply makes the music that they want to make.

The opening song “We Invent You” is a perfect introduction to the entirety of this album. It starts with a synth drone which sounds almost exactly like guitar feedback, something Unwound used to great extent in prior works. Then, the drone subsides and the main guitar riff begins. It sounds angry but lethargic at the same time. If it was at a faster tempo, it wouldn’t sound out of place on Fake Train. Then the drum beat appears, and lead vocalist Justin Trosper  begins to sing, and the context of the riff totally changes. The song soars and becomes almost transcendent, not angry and brooding. It starts off this already unorthodox album with the message of “we could do the same thing again, but why not do something completely different?”