A Project for Better Journalism chapter
The Talon
Featured, Learning 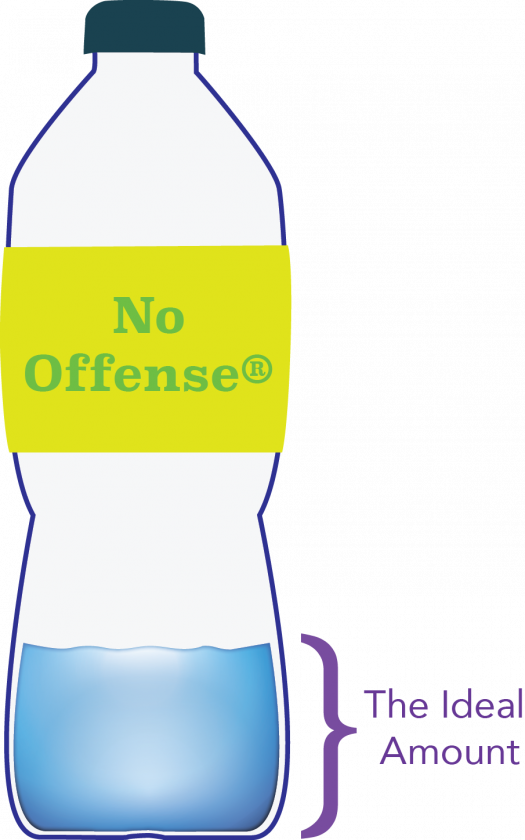 Today in America, when one thinks about what happens on the streets of a suburban neighborhood, they think of children playing, neighbors gossiping, barbecues, block parties, and even the occasional obese jogger, but a new, fierce, and commanding influence has stormed the lives of children and child-like adults across the country. This new “force” has been met with conflict, both for and against it, creating a never ending cycle of flip and flop destined to doom the social constructs of America. You may ask, what is this “force”? The answer: Water Bottle Flipping. Adolescents and “tweens” across the country have adopted the practice of water bottle flipping. While this practice can be fun for the flipper, many in the surrounding area of the flippings find it incredibly rude and disrespectful. Why does this happen?

What is Water Bottle Flipping?

The main goal of water bottle flipping, essentially, is to flip the bottle in a circular motion and have it land on its bottom or “butt” as senior Cam Flanagan calls it. Typically the bottle is less than half full when being flipped, but it is possible to flip a bottle when it is full or mostly full of water. The flipper typically holds the bottle by its cap, using their pointer finger, middle finger, and thumb in a tripod stance with the pointer and middle fingers in front of the thumb, according to senior Blake Stevens. Blake claims, “when releasing the bottle, you should flick your wrist in an upward motion.” A less common method of flipping involves the flipper resting the cap in the palm of their hand while extending their pointer, middle and ring fingers to the bottle’s center, using the thumb and pinky finger for general support of the bottle, on the opposite side of the pointer, middle, and ring fingers. When releasing from this position, the flipper swings their arm in an underhand motion, and upon release, the flipper twists their wrist in an upward motion. While in air, the bottle is supposed to rotate vertically, and go through at least one full rotation before landing on the ground. When the bottle reaches its maximum height, known as the “apex” by experienced flippers, it should be vertical to the ground, if the flipper is aiming to get it to land straight up after one rotation. The water in the bottle, in a sense, acts as a counterweight  Other methods of flipping involve a “double flip” (the bottle rotates twice before landing) a “triple flip” (the bottle rotates threes times), a “jumbo flip” (a flip with extreme height), and “capping it” (the bottle lands on its cap, rather than its butt). 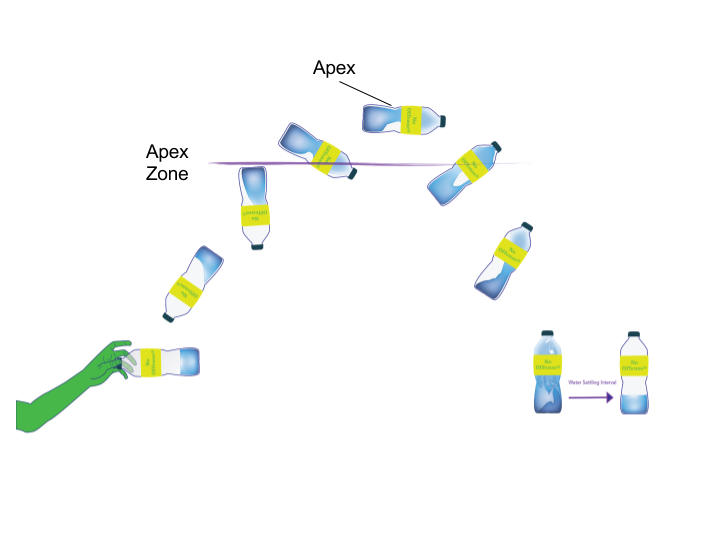 How did it start?

The primitive act of flipping, of course, began as the result of a social media trend. During May of this year, Michael Senatore, a senior from a North Carolina high school, flipped a water bottle for his high school talent show. After he successfully flipped the bottle, the crowd went absolutely bananas, foreshadowing that this would become a sort of movement within the younger congregation of people. A video of the act was posted on Youtube and it quickly went viral, spreading its facets to all the world. The concept of flipping gained popularity throughout the country, and now, flipping is a common act throughout the highschool and middle school communities. The act of flipping has also been applied to water jugs, bottles filled with mercury, fire extinguishers, highlighters, and many other common household items. Many are also seen trying to flip bottles and other objects on window sills, benches, stop signs, other people’s heads, and even moving cars (only very skilled flippers should attempt these, especially if trying to “cap it”).

Why Do People Flip Water Bottles?

Many adolescents flip water bottles because it is fun, as it is a good and “fulfilling” way to pass time. They find the act of flipping exciting and different, a way to help define their culture. Junior Alex Carbone says, “It’s unique”, pointing out how earlier that day he had witnessed a fellow student flip a highlighter onto a window sill. Many students also flip water bottles to help define themselves, and set themselves apart from others. When conducting my research in Vermont at Thetford Academy, I spotted a young lady flipping a jumbo sized water bottle on rough grassy terrain, with lots of bumps and patches. She tried about 50-60 times before eventually landing the bottle successfully on its butt. After she landed the bottle, she proceeded to take a selfie with it, while making a stereotypical duckface, assumingly to send to her friends. While the lady I was standing with thought it was stupid, the girl felt a sense of pride in herself she had never felt before. She had achieved something great (in her standards), causing her to share her success with all her friends in the electronic world. Water bottle flipping, in a sense, empowers kids to feel good about themselves by giving them a sense of accomplishment. The moment the bottle hits the ground and stands upright “is indescribable”, freshman Sean Foley says. He claims, “There is nothing else like it”.

Water bottle flipping seems to be a fun and innocent practice, driven by the feeling of achievement after one flips a bottle. However philosophy teacher, Mr. Newman, has a different, darker theory.

“Students easily become addicted to the practice of water bottle flipping,” said Mr. Newman. “Perhaps more so than the likes of nicotine and quite possibly, cocaine.”

Kids experience a sort of metaphoric high when they successfully land a bottle, causing them to repeat this behavior over and over again; trying to achieve that philanthropic feeling once again.

“I can’t resist the urge,” says Junior Sam Rollick, as he rips my water bottle out of my hand and proceeds to flip it. He took it in a somewhat aggressive manner, proving that the flipping is highly addictive. Rollick took the water bottle like an alcoholic would steal a beer keg from a low security Walmart. Perhaps water bottle flipping is a gateway drug, a highly addictive behavior that becomes hard to resist with its initial usage.

What are the drawbacks of Water Bottle Flipping?

Many have expressed hatred towards the act of water bottle flipping. Many teachers at Exeter High School have expressed an absolute disgust of the practice, pointing out its altercations with the classroom.

The bang as the bottle hits the floor, sometimes called the “crash of a thousand crashes” or “the migraine maker”, is found by many to be incredibly annoying. The sound is unpleasant to hear, and can only distract from a student’s natural learning process. Students simply can’t focus with such a disruptive noise. Even junior Alex Carbone thinks flipping “may not be right for the classroom environment.”

Ms. Small also brings up the point that flipping encourages “unfriendly rivalry” between students, as they compete to better one another while they flip. Although it has not happened at EHS, students potentially could start physical fights with one another.

One example of mal-flipping was actually seen in a high school classroom when an anonymous teacher attempted to flip a water bottle. Instead of throwing the bottle vertically, the teacher flipped it horizontally, launching a projectile into a student’s coffee cup, which then proceeded to spill all over the student. 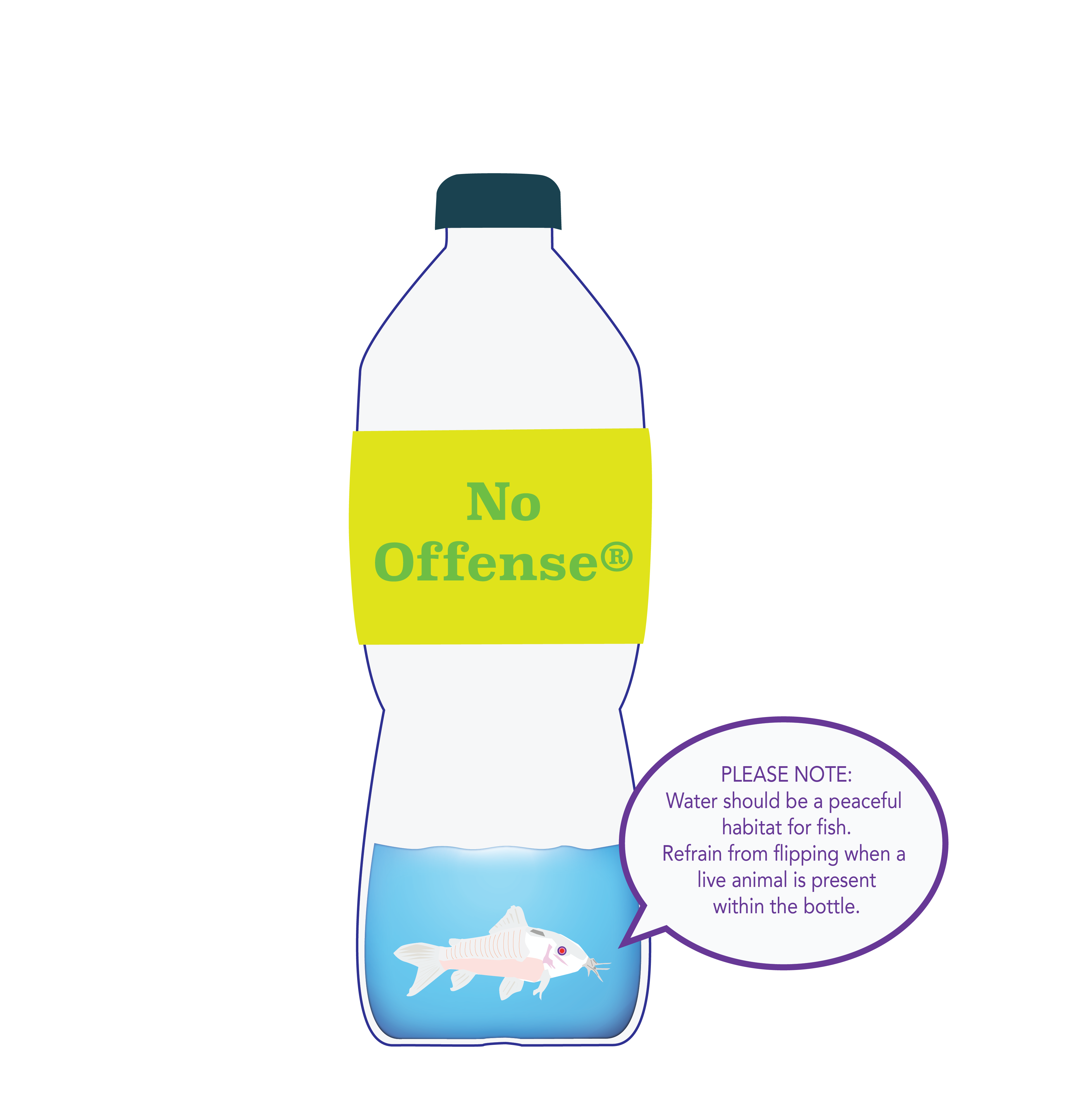 Flipping, although individualistic, has its downsides. The battle between the flippers and the practical bottle users will continue on, possibly for generations. Perhaps this statement, made by Mrs. Jedrzejewski, a sociology teacher sums up the anti-flipper wing:

“I am failing to see the point of the practice.”

And until there is a genuine understanding on both sides, the battle for flipping rights will continue on.

This is Ryan Foley, The Talon, signing off.