A Weekend in the Life of a Model U.N. Delegate 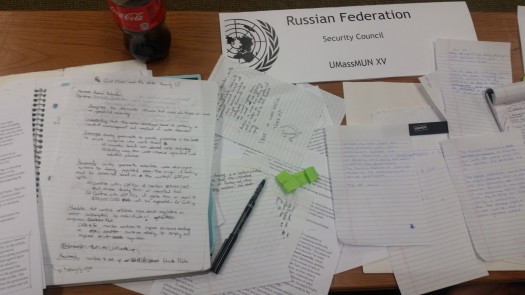 I’m a senior, and this was my last Model United Nations Conference. I, along with Junior Julia Williams represented the Russian Federation on the United Nations Security Council, which was charged with solving water scarcity.

For those of you interested in the politics behind my committee, here’s a brief rundown: demand for clean water is rapidly outstripping supply, which many fear will result in heightened geopolitical instability in the future. Many liken water to oil, aptly titling it the “oil of tomorrow”. The goal of the three-day conference was to restore water security to the world, which is defined by the United Nations as “The capacity of a population to safeguard sustainable access to adequate quantities of and acceptable quality water for sustaining livelihoods, human well-being, and socio-economic development, or ensuring protection against water-borne pollution and water-related disasters, and for preserving ecosystems in a climate of peace and political stability.”

There are two underlying types of water scarcity that fuels the problem: (a) economic scarcity, where countries lack the proper infrastructure or social organization to extract the water and (b) physical scarcity, which is the actual lack of water sources. Most vulnerable areas — India, China, the Middle East, and Africa — face the predicament they are in today due to a combination of both types of scarcity.

After a three-hour bus ride from EHS to UMass Amherst that entailed a long political debate, we all crashed in our hotel rooms to take power naps, get last minute research done, or socialize until the opening ceremonies. The evening’s keynote speaker, Professor Vincent Ferraro, delivered a passionate, Dumbeldorian speech to the delegates, covering various issues such as climate change, exponential population growth, and the U.N.’s millennium development goals. After reiterating the fact that he believed in our generation to solve the world’s issues this weekend, we exited the auditorium ready to tackle the daunting tasks presented before us.

What Happened in Committee?

In the midst of the heat of the debate, the crisis committee, which is responsible for creating events that the Security Council must react to and solve, informed the delegates of an unconfirmed report: water pollution levels increased in villages in Mali and Senegal. The news sparked a debate over whether the U.N. should conduct an investigation to uncover the cause of contamination increases (as well as the validity of the news) or whether the U.N. should immediately send in aid. Debate over this matter brought the recurring  topic of country sovereignty to the table, as Mali did not want U.N. investigations conducted in its country.

The debate was interrupted with another update from the Crisis team; the upshot of U.N. inaction to water scarcity and contamination in Mali resulted in the formation of the “eco-terrorist” group “Aqua Vita” with the goal of exterminating the human race due to their abuse of planet Earth. This brought up the possibility of military invasion as well as the issue of country sovereignty, with Mali staunchly opposed any military intervention. Only minutes into the debate over military intervention, Crisis informed the committee that Aqua Vita received funds from the Malian government, and that one of the world’s most dangerous hackers joined. A growing rumor amongst delegates that Venezuela, with the help of China, was harboring the hacker intensified tensions.

To further complicate matters, the United Kingdom and the United States drafted a resolution and planned on using this rumor to their advantage. The rumor of the hacker was only known by a few committee members, and the U.S. and U.K. resolved to blackmail Venezuela into passing the resolution by threatening to publicize the “information” that Venezuela was harboring terrorists. This temporarily derailed the committee from discussing water security  to dirty politics, prompting the chair to joke that the “it [was] starting to look like the real UNSC.” Crisis informed the committee that the delegation of the U.K. was to be taken to the International Criminal Court (ICC) due to their alleged “blackmailing”; several delegations left the UNSC to testify.

For the remaining delegates, Crisis delivered more grim news: the world was experiencing a meteorological drought, exacerbated by large-scale forest clearing. This launched a fiery debate between the climate-change accepting bloc of the committee and the climate-change denying bloc. Sticking true to President Vladimir Putin’s stance, I stubbornly insisted that the drought was purely cyclical, and climate change was no more than a “…Western ploy to stunt Russia’s industrial growth.” Debate ensued, and I threatened to use my veto power to kill any resolution addressing climate change (like a good, productive politician).

As a result of growing frustration among the chairs of the committee with the political deadlock, the five permanent members of the Security Council lost their veto power and Senegal, Ukraine, Egypt, New Zealand, and Uruguay received veto power during the final committee session. The upshot of this shift in the balance of power was a rapid increase in passed directives due to a relatively ideologically homogeneous veto power-holding bloc. Directives passed that session were characterized by puns, such as “Directive Water Those” and “Quit Stalin and Fix the Issue.”

How do Model U.N. Delegates Spend their Downtime?

In between intense committee sessions, we spent most of our time intensely discussing what happened in committee, exploring the UMass Hotel (and downtown Amherst on Saturday), and eating. On Friday night, the other delegate of Russia from the UNSC and I, over some Mountain Dew and Root Beer, plotted out Russia’s plan for world domination through the UNSC (which, unfortunately did not materialize). On Saturday night delegates could either attend a dance, show off their knowledge at the trivia bowl, or relax in the hotel hallways until the 12 AM curfew.

Several debates, resolutions, pizzas eaten, and crisis alerts later, the final committee session ended, and delegates reported to the auditorium for the closing ceremony. After hearing the speakers remark on the “fruitful debate” and “diplomacy” delegates engaged in over the weekend, impressive delegates received awards. It struck me that moment that this was the last time I was going to sit in that ashen hall, wander the cafeterias of UMass, cheer on members of my committee and school who won awards, and be a high school Model U.N. delegate. It was over.

“The chair would look favorably on a motion to close debate,” UMass’ president of the international relations club sharply stated, interrupting the muffled chatter.

From a rowdy group of delegates sitting in the back, we heard a voice state “Motion to close debate.”

“That motion is in order. All in favor of closing debate?”

Loudly and proudly, I yelled “Da,” which is yes, in Russian. After the sea of “yeah’s and “Aye’s” ended, the president stated, “That motion clearly passes. I now declare UMass MUN 2016 over.”